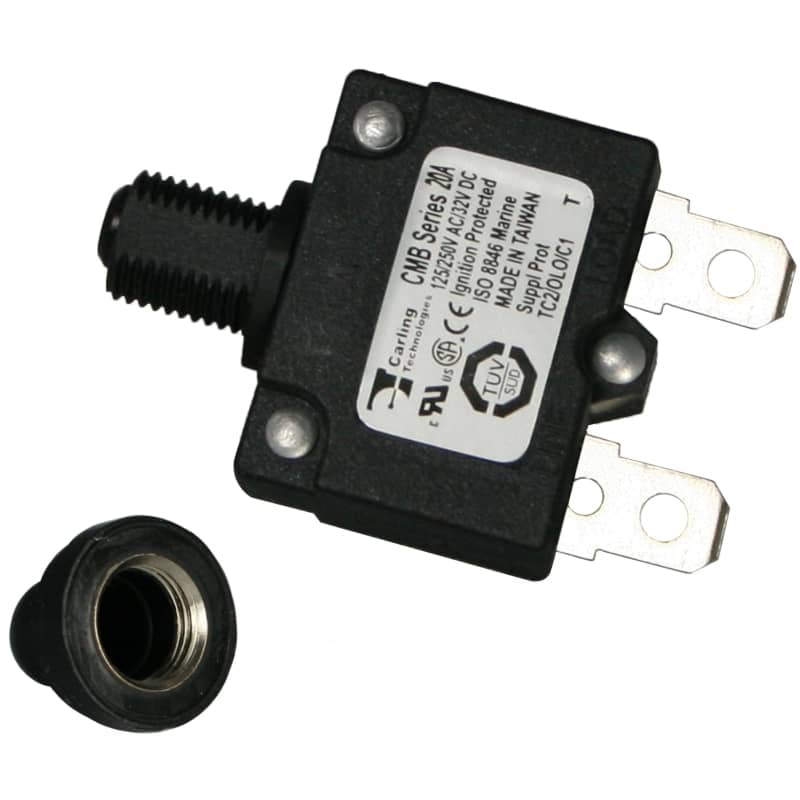 Why is  Circuit Protection Necessary?

Your entire boat’s electrical system is driven by a very powerful source: A battery.  Intentionally – and necessarily – this battery can push a huge amount of electrical current (amps) if it allowed to do so.  This allows the battery to do beneficial work, like cranking your engine and pumping lots of water out of your bilge.  But it also creates some risk:

Your marine battery – if given the chance – will try and push as much current from positive to negative as it can… hundreds or thousands of amps.  Smaller wire meant for much smaller loads it not designed to handle nearly that much current.  Typically somewhere around 10x the rated current of that wire – without proper protection – it will heat up so hot it will begin melting the insulation off the wire.

Too much current – just like the burners in your oven – can cause enough heat to start a fire.  And the smaller the wire gets – the more heat will be created from the same amount of current.

How does Proper Marine Circuit Protection Prevent This?

Overcurrent circuit protection is really pretty simple.  These devices are made to sense the amount of current and open the circuit when they are exceeded.  Opening a circuit makes a break – an air gap of very high resistance – which stops all current from flowing through that wire.

What are the Main Types of Circuit Protection on Boats?

There are two main categories of overcurrent protection on boats:

In general, breakers and fuses accomplish the same purpose, and can be used interchangeably.

Circuit breakers are electro-mechanical devices that contain an element that can reset.  So they are re-usable.  There are many types, but most often once they have tripped, they need to be manually reset.  The primary benefit of breakers are that they don’t need to be replaced after being tripped.

A fuse contains a conductor that’s designed to destructively fail when it reaches a set amount of current though it.  When a fuse blows the element is permanently destroyed, so needs to be replaced.  The main benefit of fuses is they are generally less expensive than breakers.

Tell me a Little About Proper Circuit Protection Design?

Imagine your boat’s electrical system like a tree, where the battery is at the base.  The main trunk is a larger conductor (wire), and like a tree trunk carries all the nutrients from the soil to all the branches – the main battery feed also carries all the current.

So if the main feed carries all the combined current (amps) of all the loads on the boat, then it needs to be a larger conductor with a larger circuit protection device.

Less and Less Current as you go

Each time a branch comes off the three it now only carries the nutrients (current) of the loads that are downstream of where that branch splits from the main line.  Then each limb, twig and leave can use smaller and smaller wire, and have smaller and smaller circuit protection devices.

With a properly designed system, each circuit protection device, sequentially placed downsteam will always be smaller than the previous.  This is important because you want only the smallest circuit protector to trip or blow.  Otherwise you’re at risk of loosing more branch circuits.

For example: if you used all 10A fuses for your branch feeds and main feed, several downsteam loads coming on at the same time might blow your main fuse.  Resulting in every load being shut off, even though none of the devices were experiencing an overcurrent event.

In the example above you can see how each progressive circuit protection device gets smaller and smaller as they go downstream away from the battery.  They are protecting a smaller load, using smaller gauge wire… so this make sense.

A main feeder breaker that is smaller than all next-in-line downstream fuses or breakers is fine.  Because in practice you should never experience max load on all circuits at the same time… it’s just not realistic as there are duty cycles applied to nearly every load.

Anything else that People Find Confusing?

We often get the comment “I can’t use a 5A breaker because the specs on my light says it only draws 2.2A”

Not true.  It is common practice to round up to the nearest available breaker/fuse size than your loads draws.  In fact, as long as you don’t exceed 150% of the capacity of the smallest conductor feeding the load, it would still be considered properly designed.

The reality is that in a boat, branch circuit protection is really there to prevent a catastrophic event in the wiring… usually not to protect the actual device from damage.  After-all if the short circuit happens on one of the PCBs (Printed Circuit Boards) in your underwater lights, the light is going to be fried long before the 5A fuse blows.

If super specific – device saving – circuit protection is truly required for an expensive device, the manufacturer should provide that internal to the component as a specifically designed and specified internal fuse – and not put it on the customer to find some random 2.25A fast-blow fuse.

So in most cases it’s common practice to round up the circuit protection device from the load’s actual current draw.  Spurious – unwanted – tripping is a larger concern (inconvenience) than protecting the circuit a few amps higher than the load’s spec’d current draw.

Correct, and nor should it.  Circuit breakers and fuses are designed with trip delays built in based on the percent of the rated capacity of the breaker or fuse.

They are made to allow temporary startup surges and transient events to not cause unwanted tripping.  As discussed above – they are made to protect from a catastrophic event – and in that case will open immediately.  But a current that exceeds the rated capacity by a small amount may take many minutes before it trips the device.

There are many factors involved in the design of breakers and fuses, but just as an example here’s what a typical circuit breaker trip speed curve looks like:

Signup below for the occasional interesting – not spammy – Boat Wiring tip email, and we’ll email you our complete
13-Page PDF with a bunch of schematics, tips, tricks and checklists to help with your re-wire project, and beyond!